In this short video, veteran educators provide valuable – and inspirational – advice for first-year teachers who are about to enter the classroom, starting with “Welcome to the best profession EVER.” … “There’s so much that you’re not going to be prepared for, and that’s OK!” … “Believe in yourself and believe in the impact that you bring to your class and to your students every day.” … “Find an amazing teacher to mentor you. No one gets through this alone.” … “If you hang around positive teachers in the school building, you’re going to be a positive first-year teacher.” … And finally, they all agree, “You got this!”

Using gimmicks or rewards to get students to study or perform tasks can backfire by damaging their “innate intrinsic motivation,” Sun Prairie music teacher Chris Gleason writes in a new Teacher Leader Voices blog posted this week at EdWeek.org.

“I believe that we need to ‘work with’ kids and not ‘do things to’ them. We need to fan the flames of curiosity in every child and foster their love of learning,” writes the 2017 Wisconsin Teacher of the Year, who is a member of WEAC Region 6. “Educators, let us use research, not gimmicks, to inspire our students. Inspire students using autonomy, mastery, and purpose.”

Don’t Use Gimmicks to Motivate Students

My son Miles hopped up on his bed with six of his favorite short stories that he wanted to read before bedtime. He had a voracious appetite for reading and loved asking “what if” questions about the characters in the stories. On this night, however, something changed.

The MTEA Summer Organizers hold a banner outside the MTEA office (photo: Joe Brusky).
It was another successful summer for the Wisconsin Summer Organizing program.
This year, the National Education Association hired summer organizers in nine Wisconsin union locals to recruit new union members and identify and develop member leaders.

Our twelve MTEA summer organizers had incredible success educating people about the value of our union. Thank you to everyone who welcomed them into your schools and worked together to grow membership.
Across the state nearly 500 union members were recruited, 190 of them into the MTEA. To honor their success we put their photo on the cover of our 2017-18 MTEA date book.
Thanks again to the 2017 Summer Organizers!

A group photo of Summer Organizers from around the state. This group signed up nearly 500 new members!

WEAC is welcoming Wisconsin Public School students and educators back to school with the launch of a statewide video promotion reminding parents and everyone in our communities about the critical role teachers and education support professionals play in lighting the spark of learning.

Share the video today and help us
spread the word about the great work
Wisconsin Public School educators do every day!

The video, which will appear on Facebook and other online platforms, also links to WEAC’s other features, highlighting Wisconsin Public School educators doing what they do best: Reaching, Teaching and Inspiring Students. There, you’ll find outstanding educators like Josh Jackson in Milwaukee, Gina Pagel in Waunakee and DJ Huddleston in D.C. Everest. Check them all out, and be sure to share on your own social networks!

WEAC’s SPARK video is reflective of our union – filmed and produced by members, for members. WEAC thanks teachers Katie Mueller and Dave Doering for their work to create the promotion, and to dozens of other educator-members who helped in other ways. Share the video today!

As we begin a new school year, educators throughout Wisconsin have “a lot to juggle,” Eau Claire teacher and WEAC President Ron Martin says in a back-to-school message. But, working together as union members, “We can do it!” he says.

WEAC members are always here for each other, Martin says, “to ignite our passion for public education and light the spark inside our students.”

“So, together, let’s shine a light on the amazing work you do every day for Wisconsin public schools. Your union is with you, every step of the way.”

Fenrick, an active member of the Fond du Lac Education Association who serves as a Building Representative at Fond du Lac High School, will be honored at UWO’s Alumni Awards Celebration on Friday, October 6, at the Alumni Welcome and Conference Center.

The following article was published in UW-Oshkosh Today:

A gift for making science relevant

Joseph Fenrick, also a former UWO student-athletic, graduated in 2006 with a bachelor of science in education and earned a master of science degree in education in 2009. He lives in Fond du Lac where he is a science teacher at Fond du Lac High School and an associate lecturer in the geology and geography department at the University of Wisconsin-Fond du Lac.

After graduation from UWO, Fenrick jumped straight into teaching with the Fond du Lac school district. For the first five years, he taught physical science connection classes, which consist of students with disabilities and students who were deemed to be at-risk. He has since developed and implemented both geology and meteorology curriculum and revised and implemented an environmental science curriculum.

“Joseph is an excellent science teacher who uses a variety of hands-on learning and critical-thinking experiments to challenge students, while at the same time making science interesting,” Ziegler said.

Well-liked and respected by his students and colleagues, Fenrick was named Fond du Lac High School Teacher of the Year in 2012-2013 and was runner up for the award in 2008-2009. He also was nominated for the Student Choice in Teaching Excellence Award at UW-Fond du Lac.

Chloe Haskin’s, a former student of Fenrick’s at both Fond du Lac high and UW-Fond du Lac, points to his ability to teach multiple subjects to all ages and abilities as a key to his success.

“Joseph has the ability to engage students, and these students come to class wanting to learn. Hands-on activities are often included, and he is flexible with his methods and has always been patient with students who may not understand a subject immediately,” Haskins said.

A four-year track and field letter winner and two-time WIAC Scholar-Athlete Award honoree while at UWO, Fenrick also spent four years as the assistant track and field coach at Fond du Lac High from 2008 to 2012.

During his fourth year of teaching, Fenrick became active in the local teachers’ union and, in 2010, became their public relations director, a role he still holds. In 2015, he campaigned for the District 15 County Board seat. He ran against the longest serving member of the board–who held the seat for 20 years-and won. He was elected to the Fond du Lac County Board of Supervisors with 78 percent of the vote.

“I have been impressed with Joe’s skills and his desire to learn everything about county government, and I respect him for every decision he has made on the board, including some controversial issues. I see a great future in public service for Joseph, because of his desire to serve and the passion he has demonstrated,” Buechel said.

Honors
Fenrick will be among those honored at UWO’s Alumni Awards Celebration on Friday, October 6, at the Alumni Welcome and Conference Center. The cost is $30 per person and includes dinner. For more information or to RSVP for the event, please call (920) 424-3449 or send an email to alumni@uwosh.edu.

Classrooms from around MPS were treated to a brilliant performance of “The Wiz” Wednesday morning at Rufus King Middle School. The students of RKMS, Golda Meir and Story Elementary collaborated to make it happen. Check out these photos from their performance. 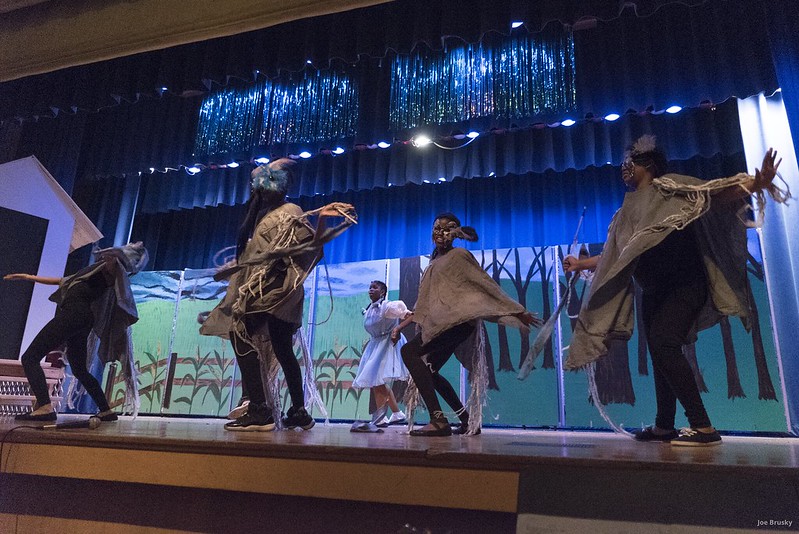 There will be a public showing on Friday at 6pm at Rufus King Middle School.

Tickets are $5.00, and can be purchased at the door (121 E. Hadley Street – enter on the Palmer Street entrance). Please come out and support the Rufus King International Middle School Generals, Golda Owls and Story Gators. This is what collaboration looks like!

In a column in Education Week, blogger and California teacher Larry Ferlazzo asks educators to share their most difficult moments of teaching. Among those quoted is Minnesota’s 2014 Teacher of the Year Tom Rademacher, who wrote a book titled It Won’t Be Easy: An Exceedingly Honest (And Slightly Unprofessional) Love Letter To Teaching. Larry cites this touching excerpt from Tom’s book:

In my third year of teaching, just before the students came back from lunch, my whole teaching team was called to the office. Our principal delivered the news that one of our students, an eighth grade girl of profound talent and empathy, was about to be told that her mother just committed suicide. The girl’s father was on the way, but we were to act as if everything was normal until he got there.

The girl was in my next class, and that hour was without a doubt the hardest I have ever had as a teacher. …

During the hour, I tried not to look at her too much, tried to act as normal as I could, tried not to break down, to run to her, to hug her and tell her a thousand times, “I’m sorry.” I felt awful for knowing what I had no right to know, and felt guilty for being able to teach, to joke with students, with that student in particular, knowing what I knew.

As the hour ended, she was called to the office. After twenty minutes, her three closest friends were called up as well. News spread over the next few days and the community rallied and supported her in ways impressive and beautiful. The girl’s teachers became among the most important people in her life, but not as teachers. We were people, humans, who cared for her as a person. What she needed, the only thing she needed, for the last few months of school, was as much humanity and care and support as we could give her, and so we did, because more than teacher and students, she was a human and we were all humans.

Teaching is completely full of humans.

Really, full of them. Real humans. Oh, and how often we forget. Oh, and how much did any training, education, staff development, or research about teaching get me ready for my most trying moments, for that or any other of the many times I’ve felt the most effective and important and influential at my job? Not at all. Because Teaching is only sometimes about teaching. Teachers are far too often complaining about not getting to do their jobs because they don’t get enough time just saying things for kids to write down. Teaching is so rarely that, is so much often doing all the work to get a student to that moment, is so often supporting a kid who is far away from being taught that day.

The importance of the emancipation of 4 million people enslaved in the United States is not marked by a federal holiday. The celebration of the last enslaved people receiving word of their freedom is called Juneteenth. Juneteenth is celebrated every year on June 19 and Milwaukee’s Northcott Neighborhood House is host to one of the oldest celebrations […]